A vaudeville house, candy factory & beer parlor, Jewish Community Center and celebrity nightclub, a lot of magic happened at 7165 Beverly Blvd before the first film projectors rolled in. But everything would change in 1978 when Sherman Torgan turned a shuttered adult theater into the repertory movie haven we know today as the New Beverly Cinema.

For nearly 30 years Sherman Torgan dedicated his life to sharing his love of motion pictures, turning a simple venue into a de facto film school and beloved cultural hub through nightly themed double feature pairings of classic, foreign, independent and arthouse cinema. Seeing Sherman in the box office was always a welcome sight for the city’s cinephiles. Upon his untimely death in 2007, his son Michael assumed day-to-day operations, helping usher in a new era for the theater. Michael continues to use his deep knowledge and passion to help manage the theater to this day. 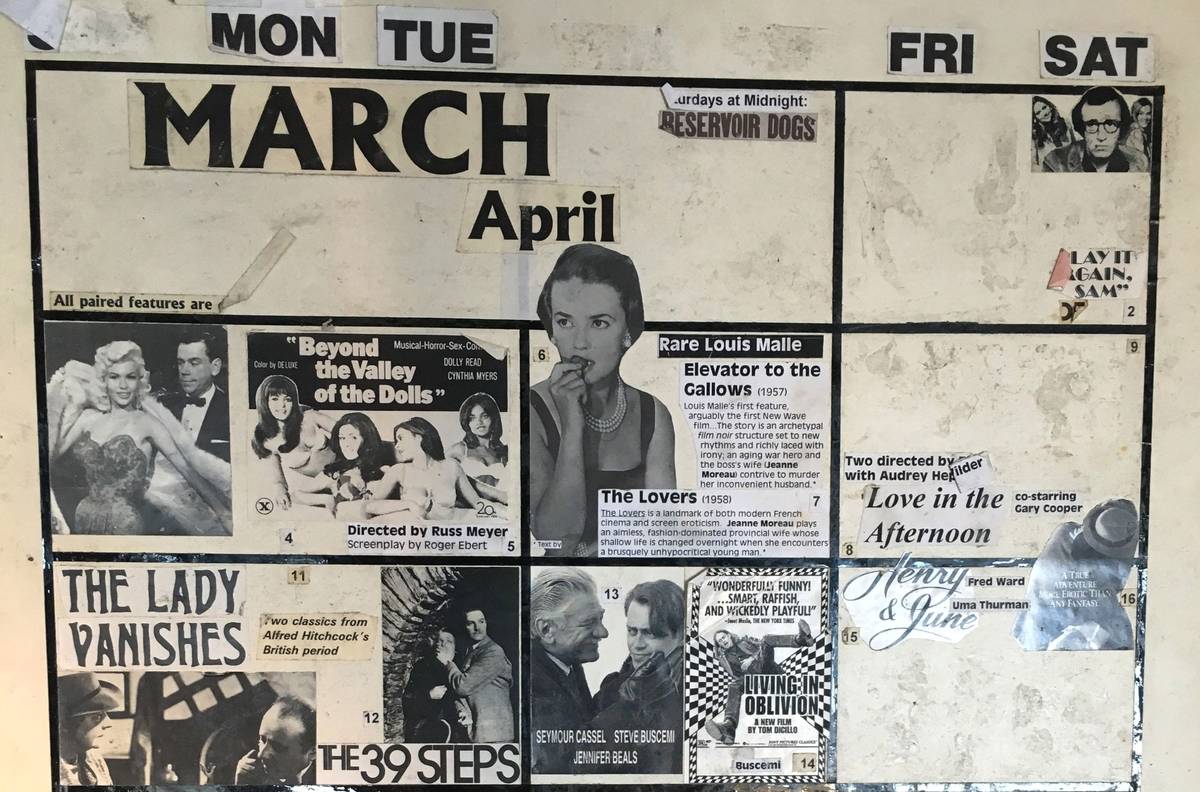 After 10 years of being a benefactor of the theater, Oscar-winning filmmaker Quentin Tarantino became owner and head programmer. Committed to celluloid, Quentin made the unique decision to have the New Beverly solely project film prints. "I want the New Beverly to be a bastion for 35mm films. I want it to stand for something. When you see a film on the New Beverly calendar, you don’t have to ask whether it’s going to be shown in DCP or in 35mm. You know it’s playing in 35 because it’s the New Beverly."

While ticket and concession prices have not changed in the two years since Quentin came on board, there have been a few changes. A small partition wall in the lobby was removed and we’re now able to display large format posters, mostly from France and Italy. The periscope projection system was eliminated, resulting in a crisper and brighter image. 4 Track mag heads and a 16mm projector were installed, giving us the ability to show more film formats. Plus, the concession stand has been expanded, carpet replaced, seats re-upholstered and cupholders added.

Quentin does the vast majority of the monthly programming at the New Beverly, having launched with an October 2014 double feature tribute to Paul Mazursky featuring BOB & CAROL & TED & ALICE and BLUME IN LOVE. He also started an ongoing weekend kiddee matinee series and added Friday midnight shows of his own work, promising “if you want to see one of my movies in 35mm, any week of the year, there is one place you can go to.” 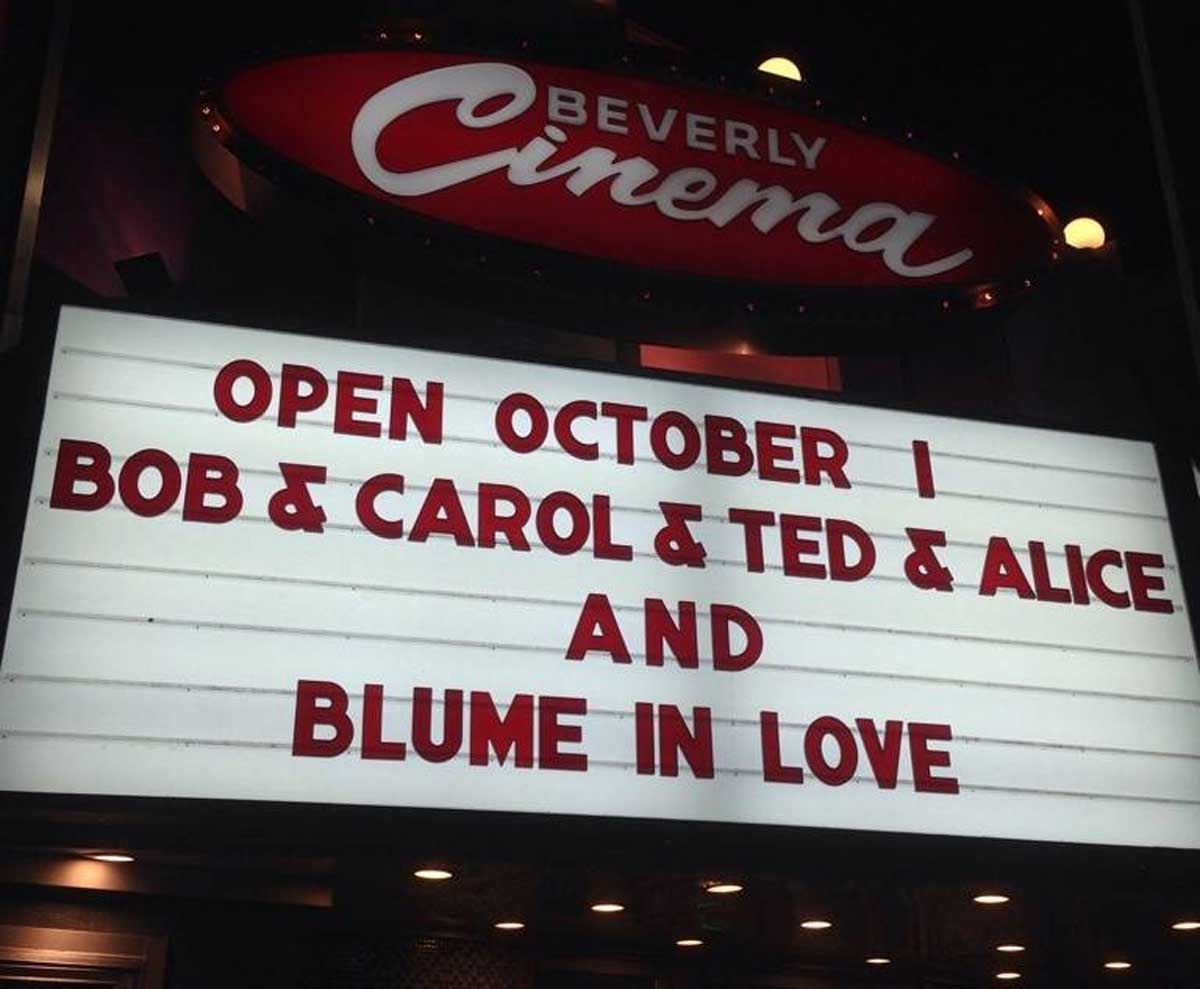 Other popular programming series that Quentin has scheduled include two blockbuster months in tribute to 90’s cinema, Shawtember (an action-packed Shaw Bros. retrospective), Ozploitation (Australian exploitation), Meeker Mania (an extended Ralph Meeker celebration) and salutes to Richard Fleischer, Glenn Ford, John Cassavettes (as actor) and more. Quentin has also continued and expanded the wildly popular Grindhouse Tuesdays, run for over a decade by our beloved friend and Hollywood Book and Poster Co. founder Eric Caidin with current New Bev manager Brian Quinn. Tuesdays remain one of our most popular nights with a tremendously loyal following. 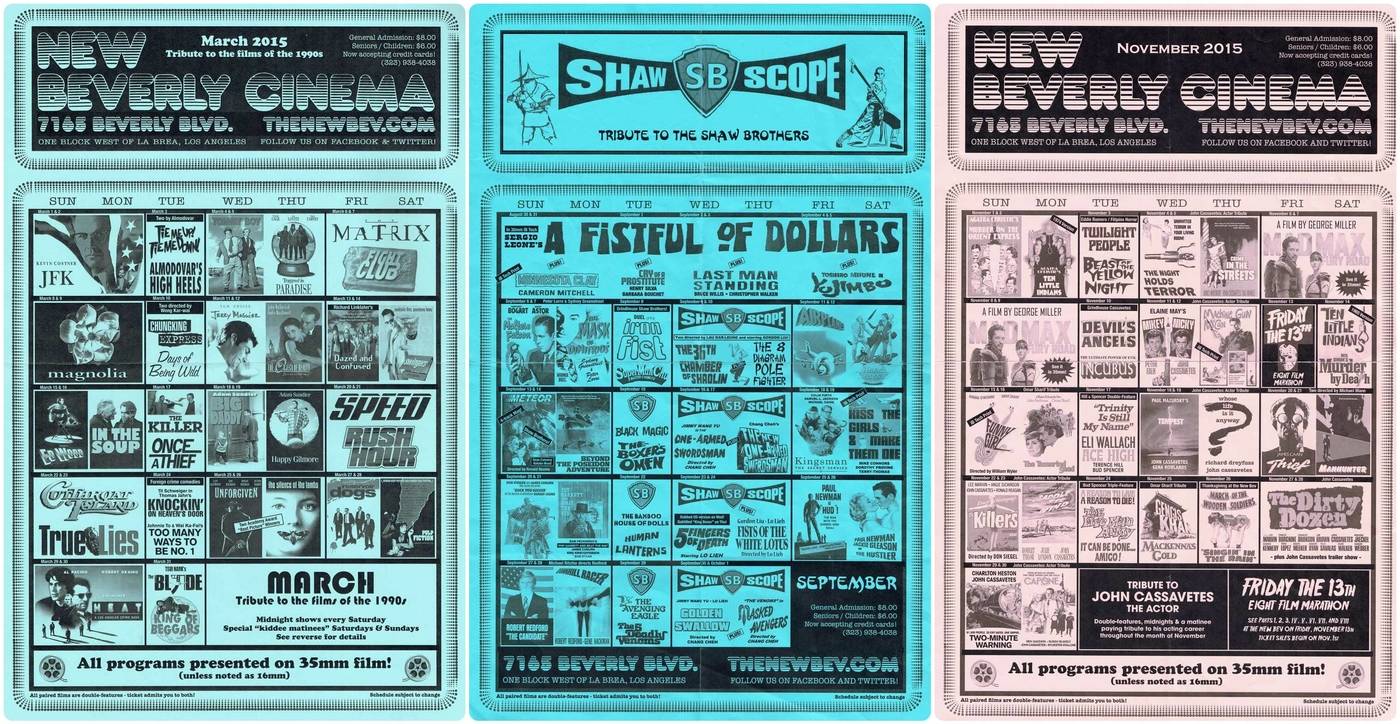 Many of the 35mm and 16mm prints shown are from Quentin’s private collection. One of the prime reasons he wanted to run the New Beverly was to share his collection with an audience. Said Quentin of his prints, “I have a really, really huge film-print collection that I’ve been curating for almost 20 years now. And I want to show my prints! We’ll still be borrowing prints from the studios and other collectors, but I like the idea that the base of what we’re doing will be my print collection. Some of them are absolutely amazing, and I want people to see them, to enjoy them." 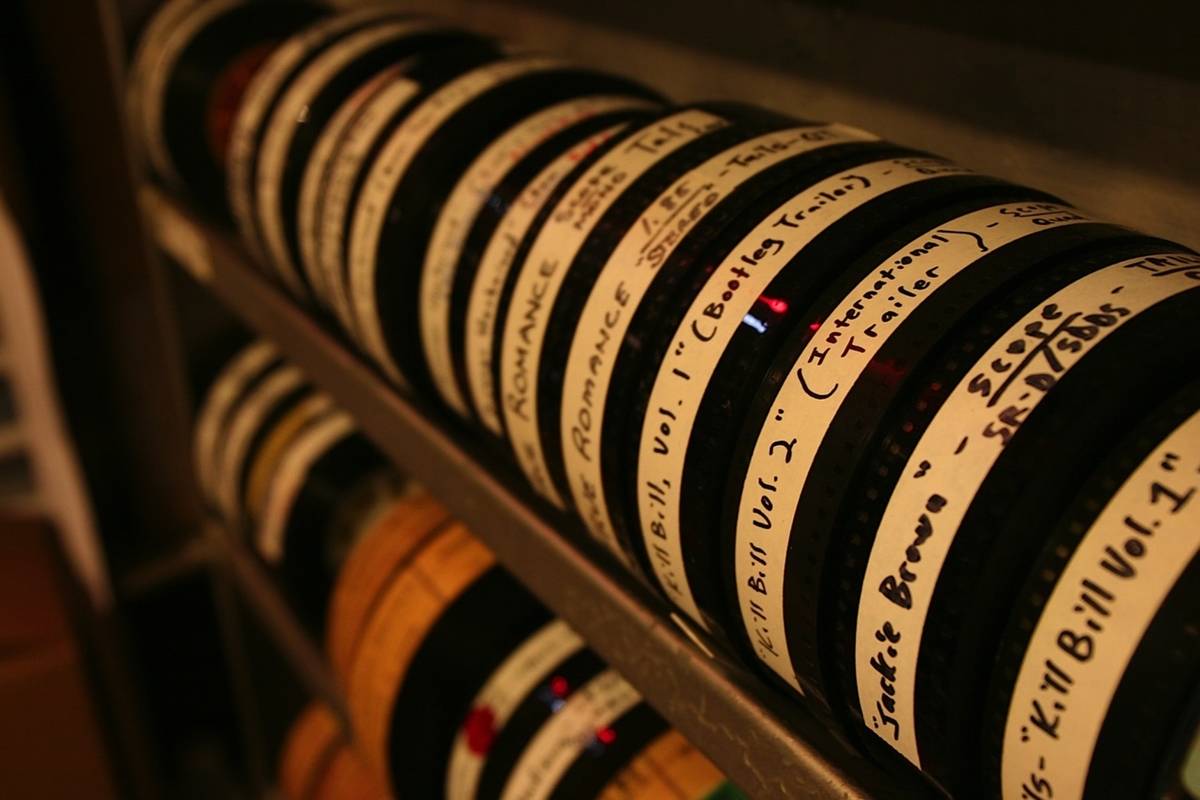 We look forward to continuing to keep light on the screen in the house that Sherman built, to facilitate Quentin’s dreams and to keep building the New Beverly family with you all. 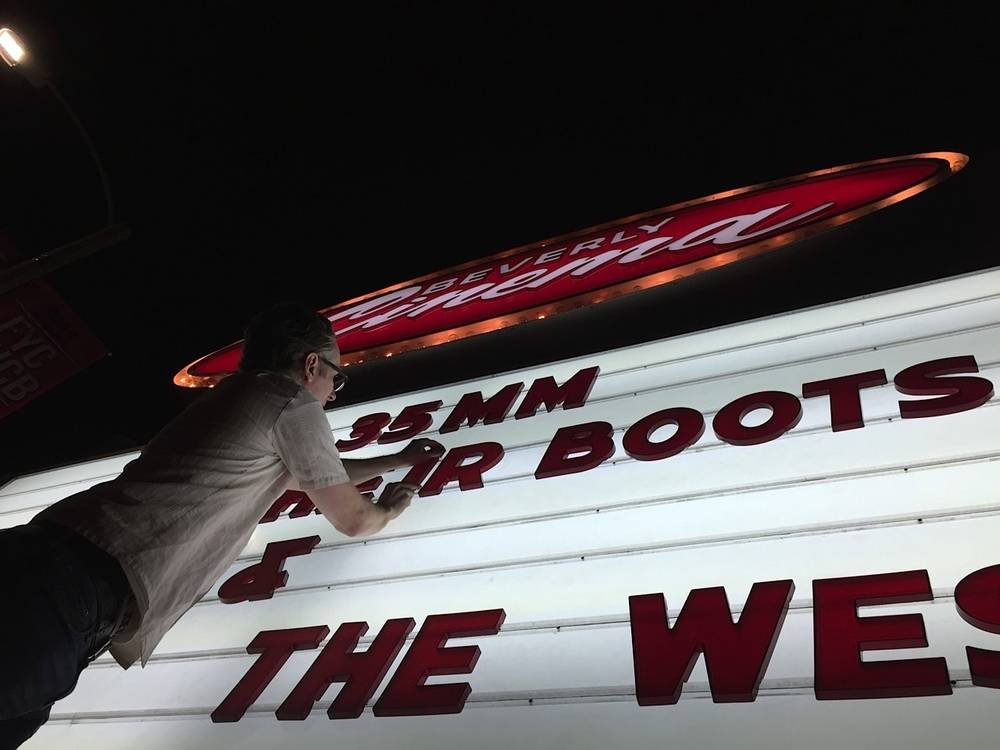 As long as I'm alive, and as long as I'm rich, the New Bev will be showing double features in 35mm. Quentin Tarantino

These movies deserve a night being projected, they deserve time on the silver screen. Quentin Tarantino

You get no points for laughing at an old movie just because it's old. You look like an idiot. Quentin Tarantino

I want the New Beverly to be a bastion for 35mm films. I want it to stand for something. Quentin Tarantino

The most common sizes of film stock used to shoot, print, and present movies. 35mm is preferred for commercial film and TV shoots, with multiple stocks for select shooting conditions. 16mm is more often used for lower-budget projects, commercial and industrial shoots, and previously as a “home movie” format.

A now-dormant process which allowed for multi-channel sound reproduction in theatres using magnetic striping attached to the film print. Often vulnerable to erasure and damage due to demagnetizing and detachment through aging, requiring strict storage and handling conditions. Supplanted by Dolby Stereo, an optical process requiring less delicacy and upkeep.

This indicates the dimension of the projected image, usually measured by comparing the width to the height. For example, 1.85:1, commonly called “flat”, means the picture is 1.85 times as wide to every increment of 1 it is high, and 2.35:1, or “scope”, means the picture will be even wider.

The process when the reel on one projector finishes, and the projectionist begins the next reel on the other projector. Detectable from observing cue marks in the upper-right corner of the film, which alert the projectionist when to start running the other machine, and then when to switch to it.

A modern cinema sound process where coded information directly etched onto a film print is read by a light beam connected to a computer and decoded into multiple discrete channels. Unlike regular Dolby Stereo, the reader is not affected by film splices or changeovers, resulting in clean, uninterrupted sound.

A form of image deterioration associated with films printed on stock manufactured by Eastman Kodak (though other manufacturers and labs often come into play) in the ‘60’s through the ‘80’s, characterized by color shifts to one dominant tone - usually red, pink, or brown.

A form of image deterioration associated with films printed on early stock manufactured by the Fuji company in the ‘60’s through the ‘80’s, characterized by large clusters of red, dot-like discolorations on the image.

Originally a nickname given to a theatre known for being in somewhat run-down or unkempt condition, and running older and/or non-prestigious films, usually in double- or triple-features (hence, “grinding” through the movies). Now better known to describe the kinds of genre and exploitation films that would play such a venue.

A now-extinct dye-transfer printing process which used three color-tinted negative sources (yellow, cyan, magenta) blended through imbibition (which I.B. represents) to create theatrical prints with extremely saturated colors that kept consistency for decades. In use until 1974, briefly revived in the late ‘90’s, then discontinued for good in 2002.

A single audio channel of sound. The manner in which almost all films and recorded music were presented until the late ‘50’s, when technology allowed for discrete divided channels of sound. When viewing a movie with such a soundtrack, the audio generally comes from the center speaker behind the screen.

Cell phones and all other electronic devices are to be silenced or shut off, and not in use anytime lights are down and film is running on screen, including ads, shorts, and trailers. Violators of this policy will be given one warning, followed by ejection from the theatre without refund.

Trade name for the film loop used by projectionists to make sure the projected image is in focus, the masking is set for the correct ratio, and in some instances, that the two projectors are aimed precisely so that there is no picture shift when switching between them.

A method of joining two pieces of film so they can be projected as one continuous piece. There are three methods: the Tape Splice (usually used for editing), the Cement Splice (used for original material), and the far less common Ultra-Sonic Splice (used for Polyester Base film).

A gear inside a film camera or projector featuring pointed teeth, which latches onto similarly shaped holes in film stock, to feed it through the machine, without touching the image area on the film itself. Also can refer to the area on the film print where these holes are found.

Term for when a print begins to deteriorate in a manner that will ultimately render it unprojectable or worse, inspired by the smell that is often detected during this state. Symptoms involve warping and shrinking of the film stock and increasing inability to keep consistent image focus.